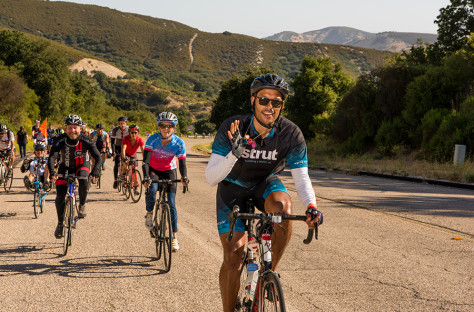 Saul was one of 2,200 cyclists who made the seven-day bike ride from San Francisco to Los Angeles to raise money for HIV/AIDS services provided by the San Francisco AIDS Foundation and the Los Angeles LGBT Center. Saul, who works in public relations and communications in the fashion retail industry, first took an interest in ALC when he moved back to the Bay Area after a seven-year stint working in London. “I was feeling lonely, but I was keen to get involved in my community again,” he explained.

After volunteering at the orientation the day before ALC 2016, Saul felt inspired. “That day I met many amazing participants and was moved and touched by their stories, determination, and compassion,” he said. “Then I saw a familiar face in the crowd, that of my friend David Donovan, who was taking part in the ride and who challenged me to sign up for the actual ride. He said it would be tough, but a great way to meet new people.”

Never one to back down from a physical, emotional, or mental challenge (he is a Summer Searcher after all), that’s exactly what Saul did. He signed up for the 545-mile bike ride that day, and on December 1, 2016 for World AIDS Day he kicked off his ALC fundraising campaign.

He reached out to his network of friends and colleagues in London, Paris, Milan, New York, and San Francisco, who Saul said were not at all surprised that he had signed up for the challenge. He also utilized his own PR skills to come up with unique and compelling ways to encourage his network to support his campaign.

As for the ride itself, Saul said that one of the biggest challenges was the uncertainty he felt as a first-time rider, and of course, the sheer distance he had to cover. He explained, “Not knowing what to expect was difficult. One day it’s 63 miles climbing hills, then the next day is 110 miles and flat, but 97 degrees. Sometimes you want to give up, but you just have to keep calm and carry on.”

Despite those moments of pain and uncertainty, he always felt supported by his fellow riders and roadie volunteers. “It’s an amazing community of people who are capable of thinking of something bigger than themselves. We’re all tired, but we keep cheering each other on.”

Saul also said that participating in this ride gave him his confidence back and helped “re-ignite” a political/advocacy voice inside of him to stand up for others, their rights, and human dignity.

As a young man from East Oakland who struggled with his sexual identity, his upbringing in a traditional, conservative Mexican family left him with unresolved guilt, shame, and an internalized sense of homophobia, which lasted years. This experience made his ALC ride even more personal and meaningful.

“It was a personal journey from isolation to a loving and moving community—the biggest coming out and coming home party ever! ALC became my agent for social justice and a platform for action.”

The day after Saul completed the ride in LA, he attended the Los Angeles Resist March, which acted as a powerful capstone to his ALC journey, saying the experience “gave the word ‘Pride’ a whole new meaning. It felt amazing to participate in a human rights march, which this year replaced the historic LA Pride parade.”

Saul says that one thing he learned from Summer Search was the “power of a good story” and how “allowing yourself to be vulnerable can help you connect with others,” something he put to practice in his experience with the ALC community.

We want to thank Saul for sharing his story with us, and for being a shining example of the kind of leaders Summer Search envisions for the world.