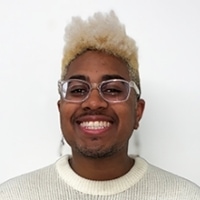 Jen is compelled to do work that inspires authenticity and understanding to promote shared wellbeing. As someone who has had nonprofits play a major role in developing the values they hold nearest, Jen is thrilled to be in the position to be a part of facilitating the growth of the young people of today who will be the adults of tomorrow.

After finishing a BA in Women’s, Gender, and Sexuality studies from The College of Wooster Jen started working with young people as a College Persistence Coordinator at East Bay College Fund. Following working at East Bay College Fund Jen took a short break from structured office work to pursue the arts, which eventually landed him at YR Media. At YR Media Jen assisted in teaching high schoolers various aspects of media, from digital art to journalism. Having felt very accomplished as a journalist, from working with NPR to winning the Excellence in Multimedia Award from the NLGJA, Jen also felt the pressure of consistently churning out quality stories was getting to be a bit much, but wanted to hold on to the energy that young people were optimistically bringing to the work environment. The goal of working with young people to shape the future is ultimately what brought Jen to Summer Search and what inspires Jen to do the best work on their behalf.

In Jen’s spare time he likes to listen to music of various genre’s, listen to podcasts, watch anime, cook and sew.