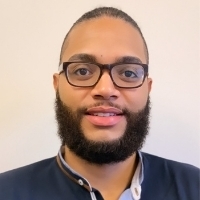 Darryl believes in spreading love and understanding to each other and our surroundings.

Darryl came to Summer Search with a background in youth development, providing students with opportunities that will help them be successful in their future. At Squashbusters in Lawrence, MA, Darryl was the head squash coach and led the high school portion of the Lawrence program.

Darryl graduated from the Summer Search program in 2010 before heading to Colby College, where he created his own major within the American Studies and Photography departments. Darryl played on the Colby men’s varsity squash team and held leadership positions for several clubs on campus, such as the Men of Color Alliance, Colby’s Gentlemen of Quality, and Students Organized for Black and Hispanic Unity. He graduated from Colby in 2014 and began working in youth development.

In his spare time, Darryl enjoys spending time at the gym, traveling, cooking, being with family and friends, but ultimately being on his couch watching comedy sitcoms or action tv series.