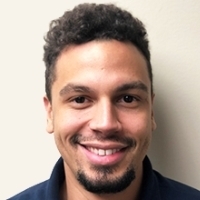 Carlos supports the idea that everyone is a teacher and a student simultaneously. He believes in untapped potential that sits inside every individual and lives to see people achieve their truth by overcoming their fears. He is passionate about cultural exchanges and believes that diversity makes the collective stronger.

Carlos understands well the process of adaptability because as a kid he moved often – immigrating to the United States from the Dominican Republic in 2006.

Carlos graduated from Temple University. During his university years he was involved with the Boys and Girls Club of America and worked closely with the immigrant community of El Paso, TX. His thirst for learning about other cultures encouraged him to join the Peace Corps. This was an opportunity for him to live and work in a foreign country, put into practice the skills he had learned in prior years and bring back new strategies to the developing communities of Philadelphia.

During his free time he likes to paint, code and polish his Sign Language skills.