"I thought that I could join my love of old cars with the act of giving back."

Donaciano Botello Torres, better known as "Chano" to his friends, is our School and Community Engagement Manager for Summer Search Bay Area. He's also an alumnus of our program who is always giving back -- whether through the mentoring relationships he forms with Summer Search students, or by donating to organizations in his North Bay community.

And he loves classic cars! Like, LOVES them -- spending much of his free time working in his garage to restore and rebuild cars from the 1950s and 60s.

This year, Chano, who lives in Santa Rosa, California, was inspired to participate in a unique holiday toy drive organized by Corazon Healdsburg, where local car enthusiasts decorate their vehicles in holiday flair and fill their trunks with toys and gifts to be donated.

Donaciano Botello Torres, aka Chano, with his 1965 Chevy Impala in his garage, full of toys for donation.

"I'm usually a Grinch when it comes to Christmas, but this year I felt like being more active in giving back," Chano explains. "This year is the first year that I have my 1965 Chevy Impala SuperSport up and running and it is actually painted red. So, I thought that I could join my love of old cars with the act of giving back through this toy drive in my hometown. My goal was to fill up my trunk with toys so that I could bring some holiday spirit."

"Plus," he adds, "as a young kid that lived on a ranch where my dad worked as a field worker, we often were the recipients of toy drives like this one. So, I thought it would be a cool thing to give back."

Chano put out a call to his community, asking for toy donations. Not only did he receive an amazing response from his friends and family, he also got a cool nickname idea: Ranfla Claus.

"A fraternity brother of mine, Henry, sent me the first donation and wrote the name Ranfla Claus. I really like the name because it brought together what I was trying to do. Since my car is huge and painted red, I thought of it like Santa's sleigh, delivering gifts from one place to another. "Ranfla" is a slang term for a car, kind of like calling a customized car a "hot rod." So, being Ranfla Claus was a perfect name to describe my love of cars and connecting it to the holidays."

So Chano, a.k.a. Ranfla Claus, received an outpouring of support of toys, games, and dollars (to buy more toys and games)! He shared his progress on social media as his trunk and garage was getting fuller and fuller. In the end, Chano raised more than $1,500 and enough toys to overflow his Impala.

Operation Ranfla Claus was a success!

In fact, check out this video below to see the full haul from Chano and all those who donated to Corazon Healdsburg.

"I cannot express my gratitude enough to all those that donated to the toy drive," Chano shares. "It is a reminder that even in hectic times people are willing to bring smiles to others. It is amazing that I have friends and family that are so compassionate and are willing to spread cheer through gifts. Thank you for trusting me to deliver the gifts."

So now, the big question is: will Ranfla Claus be back next year?

"With the amount of donations and love this year, I am going to try to make this a yearly thing," declares Chano. "My next project coming out of my garage is a 1950 Chevy 3100 5 window truck that I am hoping to use next year to deliver the toys. It has more space to load toys and hopefully I can enlist the help of my brother to take his 1964 Impala as well."

Leave a comment to say THANK YOU to Chano for his incredible giving spirit! To our entire Summer Search family, have a happy holiday season! 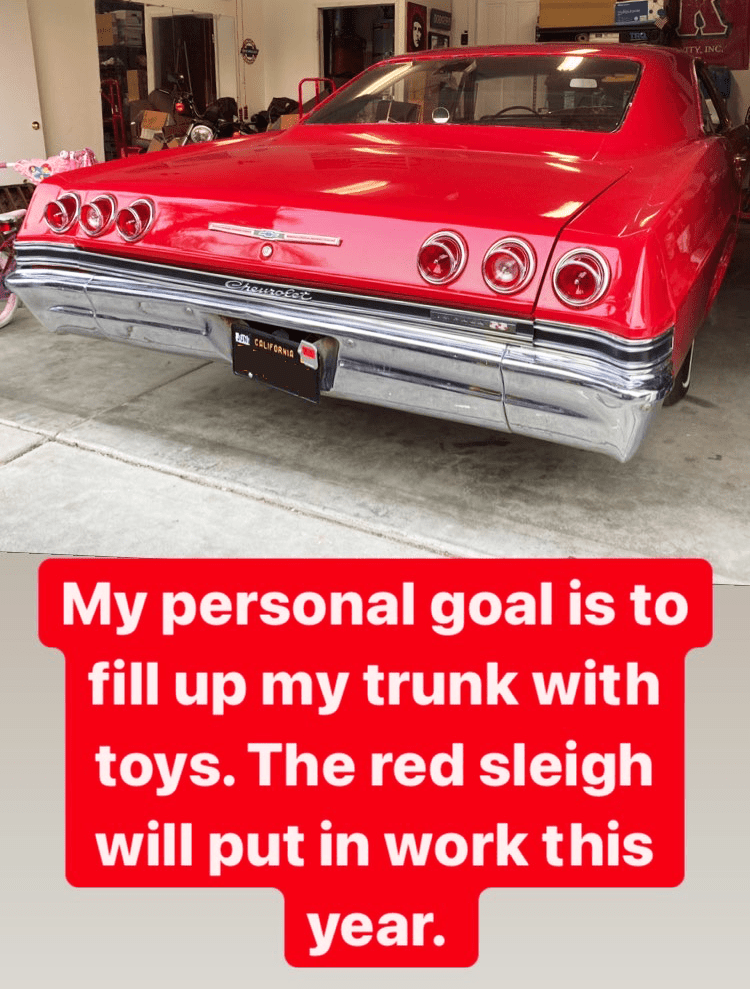