Here at Summer Search, we don’t just help young people get to college. We strive to help them become college-educated leaders who give back to their families and communities. 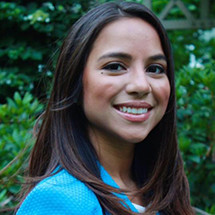 Well, there is no better example of a young leader giving back to her community than Judith García from Summer Search Boston.

Judith not only became the first in her family to graduate college, but she became a volunteer for many different causes in her community in Chelsea, Massachusetts, including working as a HelpLine Counselor at Health Care For All, an advocacy organization working to achieve affordable health care for Mass. residents.

But Judith didn’t stop there. She took her leadership skills to the next level by deciding to run for City Council District 5 in Chelsea’s first primary in 12 years.

And just last week, after all the votes were tallied, Judith found out that SHE WON! She was the only Latina millennial on the ballot, and she won with 60% of the votes, defeating the incumbent along the way. Wow!

Municipal elections in Chelsea have traditionally had very low voter turnout. However this time, thanks in part to Judith’s positive campaign, the turnout was much higher than usual. And for the first time, Chelsea’s council is now predominantly Latino. #Progress

Judith celebrating her victory with friends and family.

At a recent Summer Search event, Judith reflected on how Summer Search helped her on her path to leadership:
“As a Summer Search student, I received two incredible and life-changing gifts — summer trips to experience life beyond my neighborhood, and the greatest of all gifts, mentoring. My mentor transformed me into the best version of me. I learned that once we embrace every aspect of ourselves, we can become true leaders, agents of positive change.”

Join us in congratulating Judith on her historic win! We are honored to have been a part of her growth as a young leader, and we look forward to seeing what positive change she can affect in her new elected position!

“I did not do it alone. Summer Search, those individuals that call the HelpLine… they are my inspiration to continue to do better and to be a better person.”

Read more about the election results »