Committing to Action at CGI America

We recently sent our very own Sandra LaFleur, Vice President of Program, to the Clinton Global Initiative America 2016 (CGI America). Here is what she learned, in her own words. #GuestPost

Last week, I had the privilege of representing Summer Search as I joined more than 1,000 leaders in business, philanthropy, government and nonprofits at the sixth annual CGI America meeting in Atlanta, Georgia.

The mission of CGI America is to turn ideas into action. To accomplish this, conference participants create and submit Commitments to Action, a defining feature of CGI America, which are concrete plans that address pressing challenges across a variety of sectors in the United States. The workgroup we participated in focused on critical needs in the college and career readiness space.

The focus was broad, the dialogue was stimulating and inspirational and the commitments were bold and specific. Through it all, I was reminded of how our work at Summer Search is crucial to the forward movement of our communities and of our country. This is usually clear for me whenever the topic turns to education in general, but during this conference, the relevance of our work stood even taller as leaders spoke boldly about the impact of equity and equality on our future progress.

A Commitment to Critical Mentoring 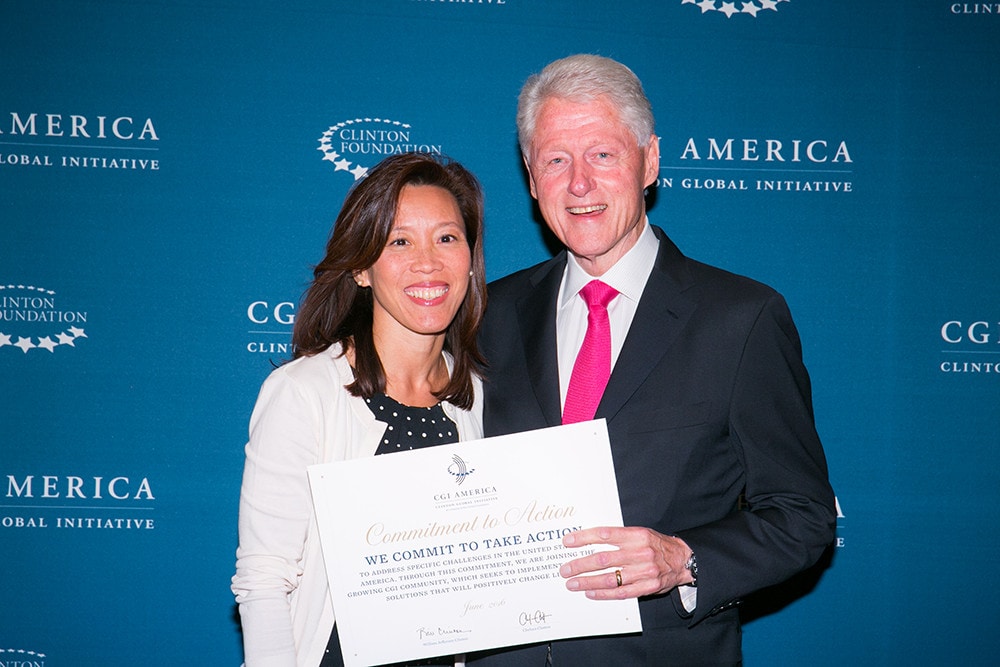 It felt validating to hear such dialogue since, prior to arriving at CGI America, Summer Search entered into a Commitment to Action with Dr. Torie Weiston-Serdan of the Youth Mentoring Action Network (YMAN) to build the field of study and practice around critical mentoring.

Made it to #CGI2016 and linked up with Sandra of @SummerSearch! Looking forward to the work! pic.twitter.com/U7hHc1tSnm

By the way, if that name and organization sound familiar, it’s because we began connecting and collaborating with Torie and YMAN back in January at the National Mentoring Summit!

Critical mentoring requires integrating and interrogating the context of our youth’s lives so that our conversations with them can be more culturally relevant, creating a space for honesty, insight and critical consciousness of the world within which we live and operate. #BeReal

Unfortunately, that is a world shaped and influenced by systems of inequity and privilege, and where graduation gaps are widening between White students and students of color, according to the National Center for Education Statistics.*

Despite those sobering statistics, with the support of other partners such as MENTOR and Amped Strategies, we are committed to convening key mentoring and youth development organizations in the coming year to establish guidelines and develop resources for the practical implementation of critical mentoring wherever adolescents are engaged in programming. Ultimately, these resources and tools will be made available to the mentoring and youth development fields.

Read more about our Commitment to Action »

Voice is such a crucial element of student agency, and to us at Summer Search, there is probably no greater joy than witnessing our students as they tap into and learn the power of their own voices. Critical mentoring enables us to help our students better understand not only the context that has shaped many of their experiences, but also the role they play and power they possess in bringing about change to that very context.

By engaging with our students in honest and critical conversations, we hope to help them achieve a level of consciousness that will prepare them for the ugliness of inequity that still abounds while also inspiring them with the promise of change that can happen once they’re ready to use their voices. Those voices are the ones we are needing to hear – the ones everyone spoke of at CGI America – the ones I am betting on can help bring about true change.

*Statistical note:
According to the National Center for Education Statistics, between 1990 and 2014, the percentage of White students who attained a high school diploma or its equivalent remained higher than that of Black and Hispanic students. Also, the gap in the rate between White and Black students earning a college degree widened from 13 to 18 percentage points, and the gap between White and Hispanic students in attaining this education level widened from 18 to 26 percentage points.