A Conversation Between Mentor and Mentee

That was Summer Search Boston college student Mahdi Mohammed talking to his College Success Mentor, Nate Campbell. The two of them have had many conversations over the years. But this particular one — on a stage and in front of hundreds of people — was a little different.

At last year’s Leadership Dinner in Boston, Mahdi and Nate volunteered to participate in a live question and answer discussion to talk about Summer Search, and give those in attendance an idea of what a mentoring relationship looks like as well as provide a glimpse at both the student and staff perspective.

So, with it being National Mentoring Month, we invite you to watch the video of Mahdi’s and Nate’s conversation.

Here are some highlights…

(4:15) Nate asked Mahdi to talk about a time with Summer Search that had an impact on him. Mahdi pointed to his two summer experiences — his first being a wilderness program in the Rockies with Outward Bound, and his second a service trip in Nicaragua with Global Glimpse — and how completing those challenging programs helped him build confidence in himself.

“Seeing myself accomplish those things made the small high school tasks seem not so large anymore,” Mahdi explained. “My horizon has broadened in the sense that I see myself as a more capable person. I’m more confident in myself and my abilities. I came back from each summer experience stronger than I’d been before. These experiences brought life lessons and values that I was able to extract and apply to my life, long after I returned home. I came back with a mindset that I needed and was prepared to accomplish more… I broke through the ceiling of what I thought was possible for me to accomplish, and I know what I want to pursue in the future.”

(5:55) Mahdi then flipped the conversation and asked Nate some questions, which he was particularly excited about given that their normal mentoring conversations mainly involved Nate asking the questions. Mahdi asked Nate if there was a time that stood out from their relationship as mentor and mentee.

Nate, who started at Summer Search as a high school mentor, has had a front-row seat in Mahdi’s life, working with him since his sophomore year. Nate explained that it was Mahdi’s high school graduation that stood out to him the most because it was the culmination of so much hard work. 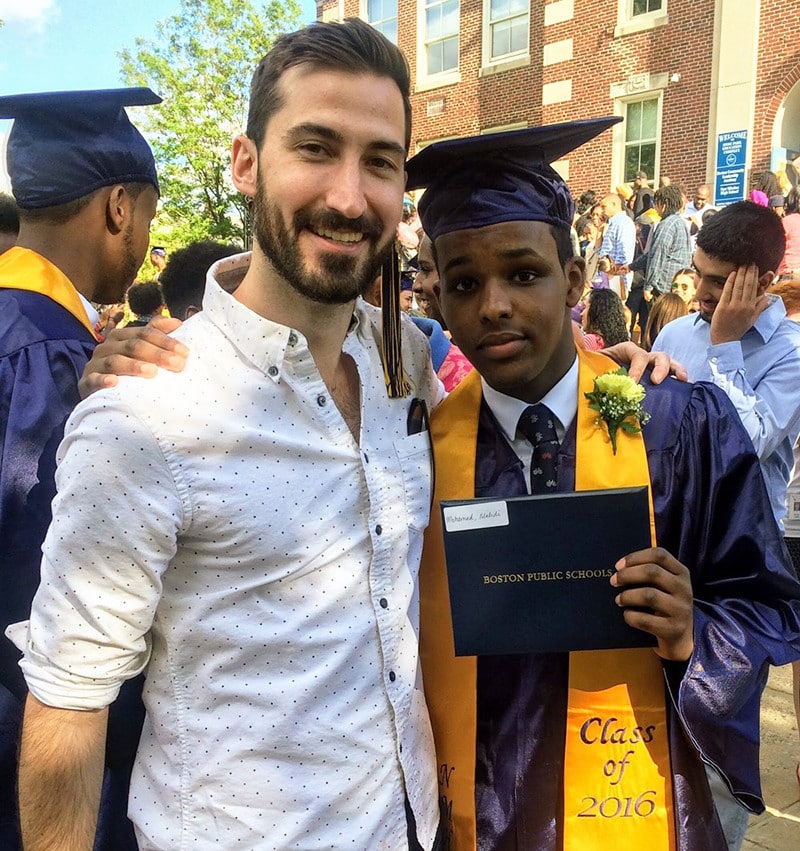 Mahdi celebrating his high school graduation with Nate in 2016.

“You were one of my first students at Summer Search, which means we were going through everything for the first time together. Yours was the first graduation I went to, and I was surprised by how overwhelming it was.”

Nate continued, saying to Mahdi, “You were going to school, bringing your siblings back home at the end of the day, going to work several hours in the hospital, then coming back home and doing hours of homework. On top of all that, you were doing things like Summer Search, going to mosque, doing community service, having a semblance of a social life… Sitting in a crowd watching you up on stage that day really compounded just how much you had done. It was the culmination of a ton of effort.”

(7:30) Nate asked Mahdi about what has changed in his life since starting Summer Search.

“When I succeeded on my summer experiences, I was able to see that the some of the limitations I had thought were placed upon me by my situations and my background were simply limitations I had put upon myself,” Mahdi replied. “It was really the trips that taught me that I can come out of a place like where I grew up and I can actually help people.”

Mahdi also cited his second summer experience as a motivator for what he wants to do with his career.

“In Nicaragua, I was working in an education facility where I was teaching English to special needs kids and fully able students in the same classroom and was even teaching adults who were three times my age. It was mind-blowing to be that involved in a community and it taught me to bring that mentality back to Boston. I wanted to work with you [Nate] to see how I could incorporate that service in my school and out at places like community health centers. It helped me better understand my passion for global public health and healthcare management. That experience gave me an awareness of how many opportunities actually exist for me.”

Mahdi is definitely making the most of those opportunities to pursue his passion. He is currently attending Massachusetts College of Pharmacy and Health Sciences and is majoring in Global Public Health and Healthcare Management, and will be transferring to Lesley University in the fall of 2018 to pursue a similar major. 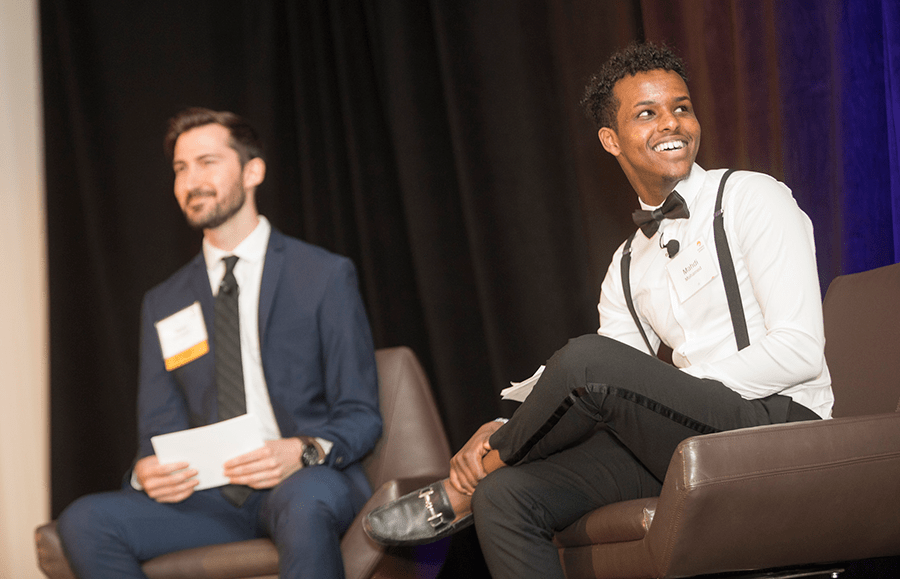 Nate responded, saying to Mahdi that “You’ve had to earn all of those opportunities. You’ve had to fight for every single one.”

(9:14) Mahdi then asked Nate a question he had always wanted to know. “What is it like to be a Mentor?”

“Everyone’s experience with mentoring is a little different,” Nate responded. “I believe we have two responsibilities in every interaction we have with our students. The first is to create the best possible environment for students to be themselves. If someone is going to trust me enough to tell me about their fears and their dreams, and their strengths and their weaknesses, it’s my job to provide a space of genuine care and to give as much attention and support as I can give.”

Nate continued, saying that the second responsibility “is to help [students] examine the experiences of their lives, not just with Summer Search but in general, and really dig into those and see what learning exists there. I know that you [Mahdi] know that I ask a ton of questions, and probably very annoyingly, come back to themes from years ago… We want to squeeze as much learning from every experience you have as possible, to help you have a better understanding of yourself. Does that sound familiar?”

Mahdi replied, “A little too familiar.” After a big smile, he continued, “I used to be so puzzled by all the questions. Now when I look back on it, I know it helped me get to where I am now. I’ve known what I wanted to study [in college] for a while, but talking that out and thinking it through helped me understand why I wanted to do that and how I wanted to get there.”

Nate was quick to follow up with a common mentoring question, “Can you tell us more about that?”

“I’ve lived the experience of the people I hope to help,” Mahdi said. “I’ve seen people come into health centers who can’t afford their treatments not get help. I want to help come up with measures to prevent this from happening so that everyone has access to health care. I’ve also got my home country of Somalia in mind all the time, with all the famines going on, the political discourse, and civil unrest. I want to help not just my people here, but my people abroad.”

(13:20) The discussion closed with Mahdi asking a similarly simple “mentoring” question to Nate, which drew laughs and oohs from the crowd: “After all our time together, what are your hopes for me for my future?”

Nate responded, “I want you to be happy.”

Watch the full video of Mahdi and Nate »