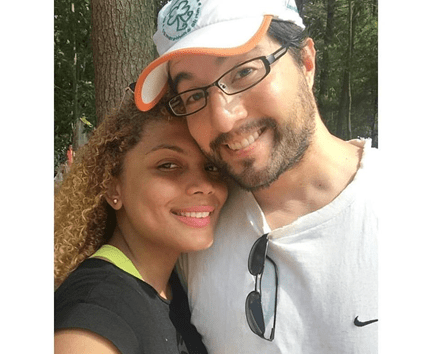 This is Summer Search power couple Danny Araniz and Rochelly Fajardo Araniz. They have been married for two-and-a-half years and been together for eight. Both were students in our Boston program and have been leaders in the Summer Search community, serving on Boston’s Alumni Board for a number of years.

With Valentine’s Day having just passed, Danny was kind enough to share a few highlights from their Summer Search love story…

The two first met at a Summer Search fitness event more than a decade ago. Rochelly was a high school student participating in the 3-mile run, a physical challenge that all Summer Searchers do before their summer experiences. Danny, who was home from Cornell University, was working as an intern in the Boston office.

After Danny graduated college and moved back to Boston, he stayed involved with Summer Search, joining the Boston Alumni Board. He kept running into Rochelly (then still in college at Northeastern) at several different Summer Search events. The more they got to know each other, the more they liked, and a romance began.

Danny recently shared a story with us that he described as both “funny and a moment that really solidified the relationship.”

Rochelly was hanging out at Danny’s house. At the time, both of them were living at their respective homes with their parents. At one point during the evening, Danny’s father knocked on his door and asked him and Rochelly to come downstairs. Danny said that this was really unusual, “my Dad always leaves me alone, he never does this.”

When they got downstairs, to their surprise they saw that the police were standing in the living room. One officer turned to the stunned Summer Searchers and asked, “Are you Rochelly? Your parents are looking for you.”

Turns out, Rochelly was out past her curfew and had missed a few messages and calls from her parents, who had gotten worried and called the police!

However, this still wasn’t the full story.

“The next time I went into the Summer Search office, everyone knew!” Danny said. Debbie Krause, Boston’s Executive Director at the time, explained to him that in addition to calling the police, Rochelly’s parents had also called the Summer Search On-Call Support Line looking for her. This is a phone number set up to provide 24-hour support to students and families in case of any incidents on their summer experiences. Typically, it was not used to try to track down two Summer Searchers on a date. Needless to say that by that point, the story had spread across the office.

While that may have been a little embarrassing, Danny faced another challenge when he was approached by Rochelly’s parents about that night.

“This was a pivotal point for the relationship,” Danny explained.

Rochelly’s parents asked Danny about his intentions with their daughter. Danny thought about, and proudly replied, “I really like her.” And eight years later, he still really likes her.

In terms of their involvement with Summer Search, Danny and Rochelly have recently stepped down from the Boston Alumni Board, after many years of service. Their schedules just became a little too busy with both of them hard at work in grad school! Danny is pursuing his Master’s Degree in Mechanical Engineering at UMass Lowell, and Rochelly is at Suffolk University earning her Master’s in Public Administration, with the goal of becoming a college dean or running a nonprofit one day.

And those schedules are about to get even busier because as Danny and Rochelly announced on Facebook on Super Bowl Sunday, they are pregnant and expecting a little Summer Search baby!

We want to congratulate Danny and Rochelly on the new addition to their family, wish them luck in grad school, and thank them for their dedication to Summer Search and for sharing their wonderful love story.